The Why & How Of Les Paul's Inventions

Dad's inventions were never for the sake of inventing but were always a result of his need to project his musical concepts for his career.  As an inquisitive kid, Dad always wanted to know how everything worked.  He was always taking things apart; my grandmother's living room was no exception.  Much to my grandma's dismay, what caught his attention initially was her player piano, Victrola, radio, and telephone, things that Dad could dissect and learn what made them tick.  They were the essential devices that ended up taking him down a path that would be the focal point of the rest of his professional career.

It started with grandma's player piano roll.  Dad realized that he could change the song's outcome by covering certain holes and punching new holes in the player roll.  When Dad began to play the guitar in public, he realized he could not hear himself in the same way as his audience.  This led him to build his own cutting lathe at the age of twelve years old...doesn't everybody?  It was the beginning of a life filled with inventions that not only solved his personal needs but changed the music industry forever.

When he first started performing for the public, he was handed a note after a show by an audience member saying, “Your act is great, but no one can hear your guitar.” From that day forward, he knew he needed to get his guitar amplified if he wanted to make the big time.

Amplifying a guitar was a novel idea back in the nineteen-twenties.  There were many technical challenges to overcome with few modern resources available.  But as usual, Dad's desire to have his guitar heard led him to use the resources at his disposal.  This, of course, leads back to grandma's living room.  From there, he could use the telephone as a microphone and the radio to amplify the sound.  One item that grandma didn't have was a solid object that he could attach a string and electronics.  He found what he thought was the answer right across the street at the railroad siding, a piece of railroad track.  It was undoubtedly rigid enough and wouldn't vibrate.  When he told his mother of his discovery, she remarked: "The day you see a cowboy on a horse playing a guitar with a railroad track"… grounded that idea in a hurry, and out the window, it went.  Dad realized that he needed something that's not heavy but very dense, very sturdy, something that's going to sustain the sound and be something you love when you hold it, and he immediately thought of something like a woman!   All roads led Dad to the "Log"...

Jim  Fisch's phone interview with Les about "The Log" and the Epiphone factory November 18, 1992 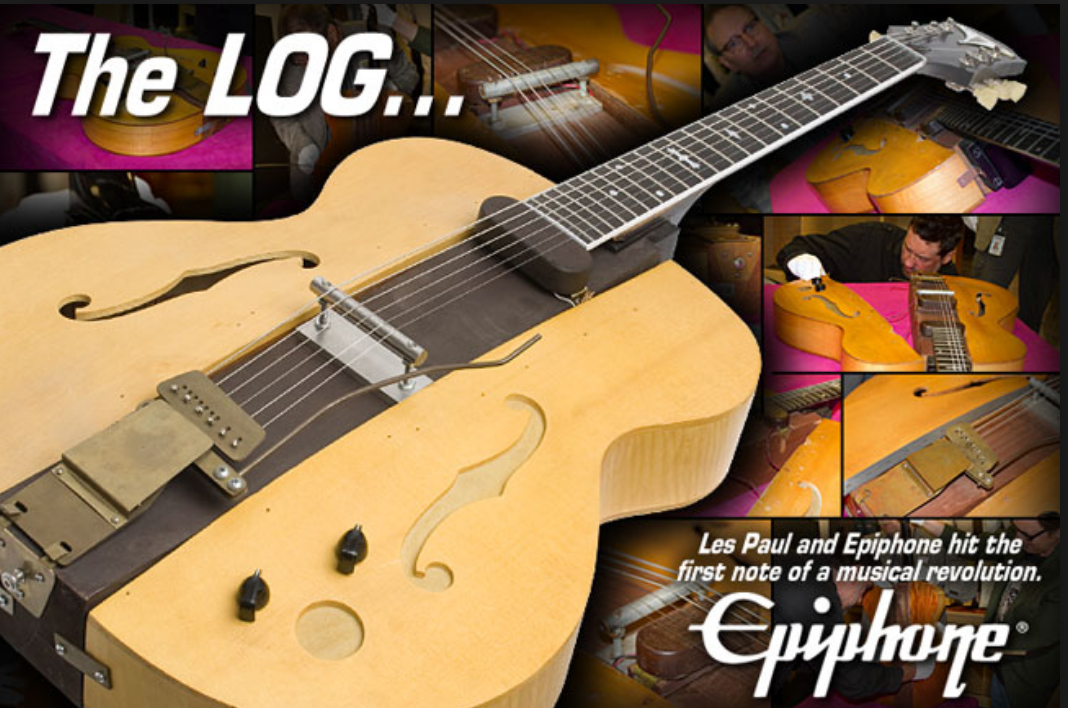 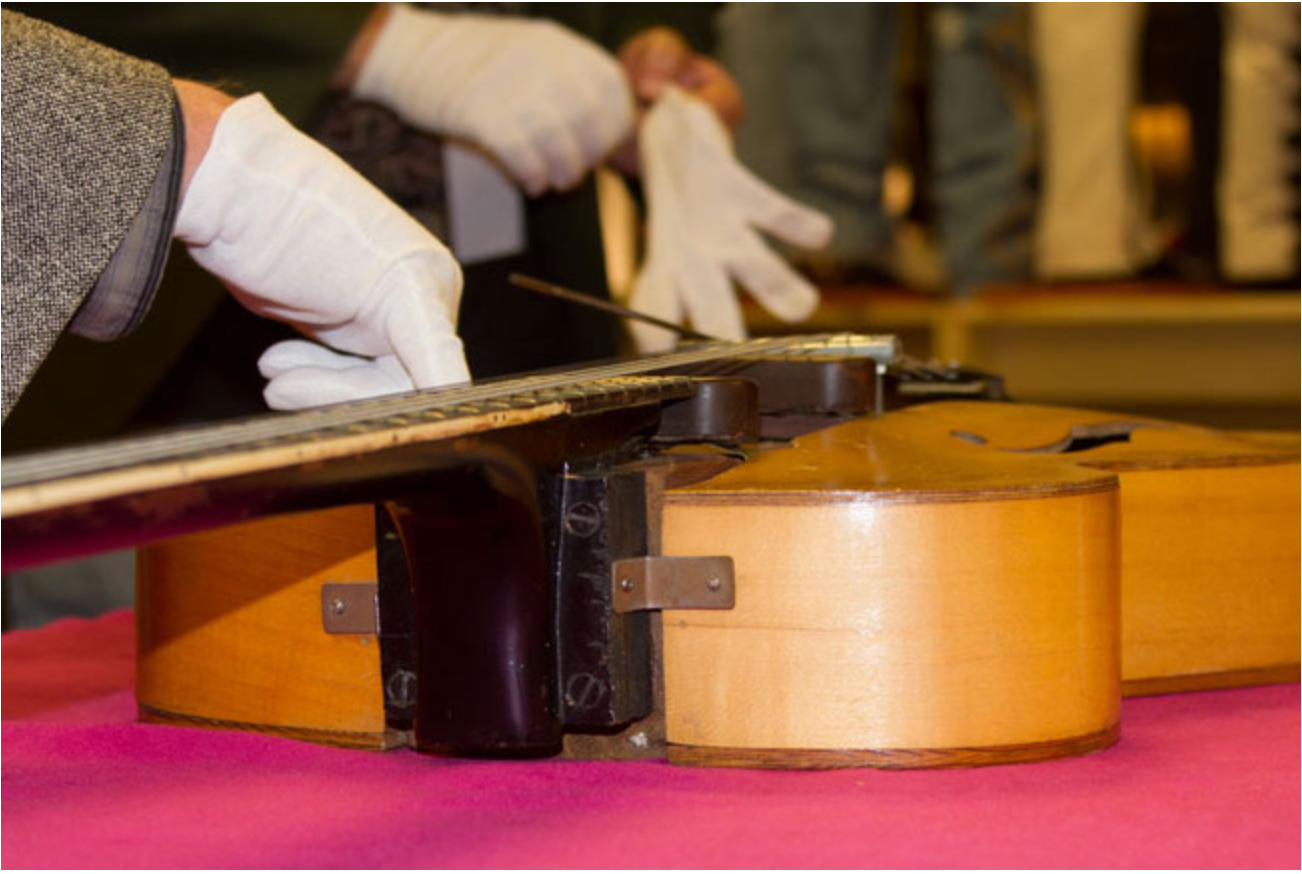 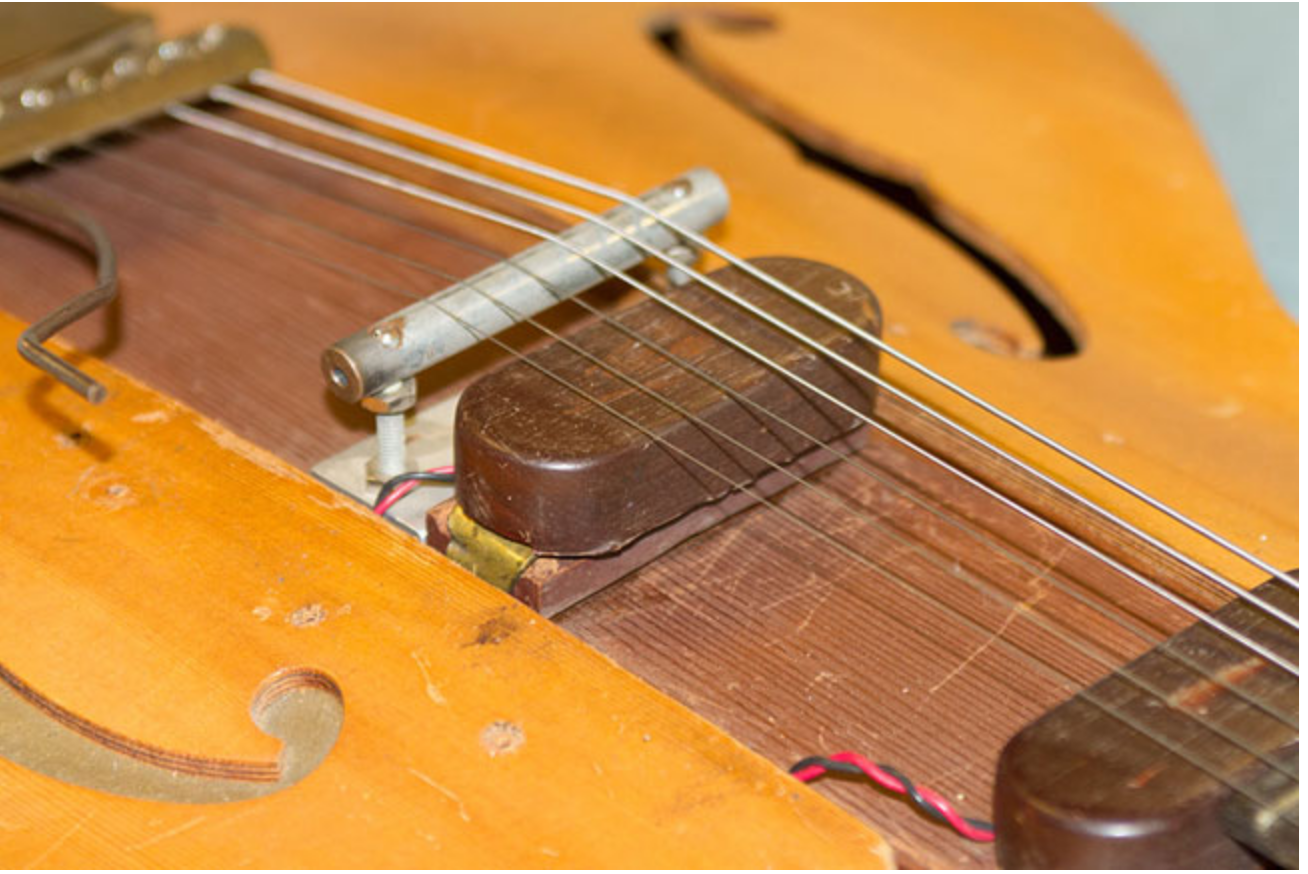 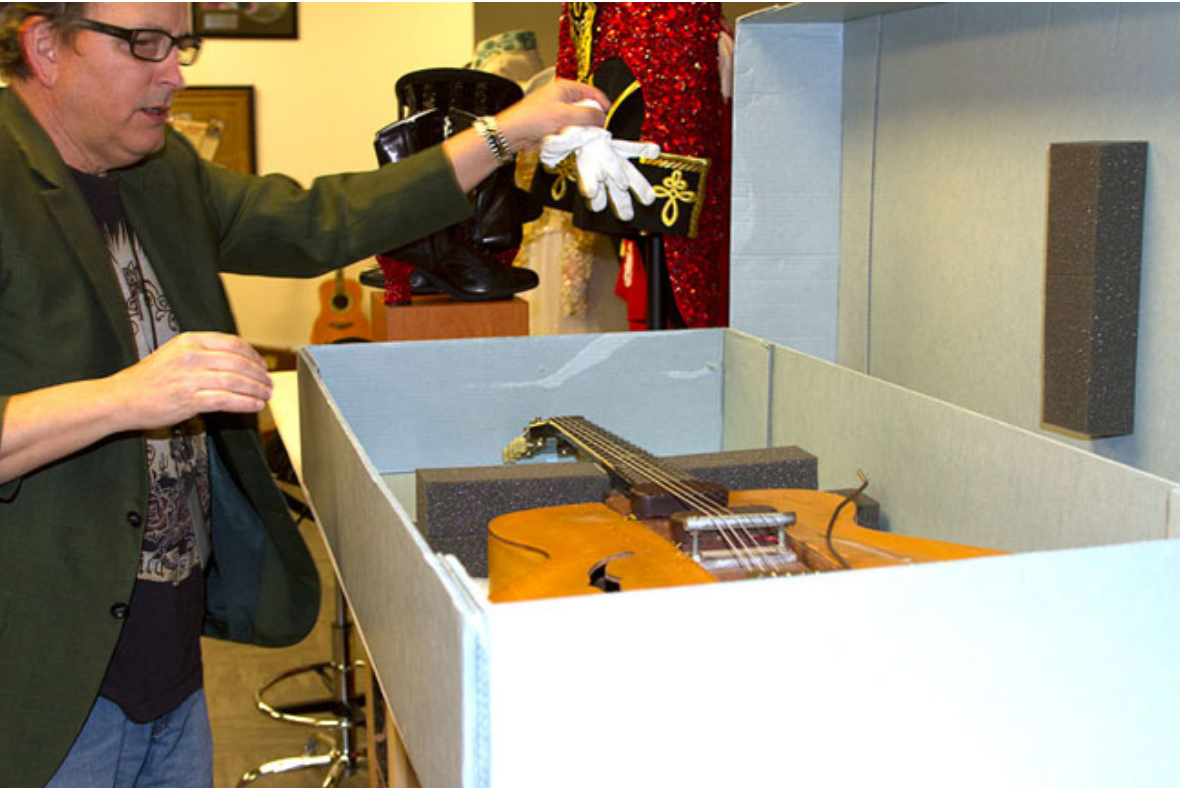 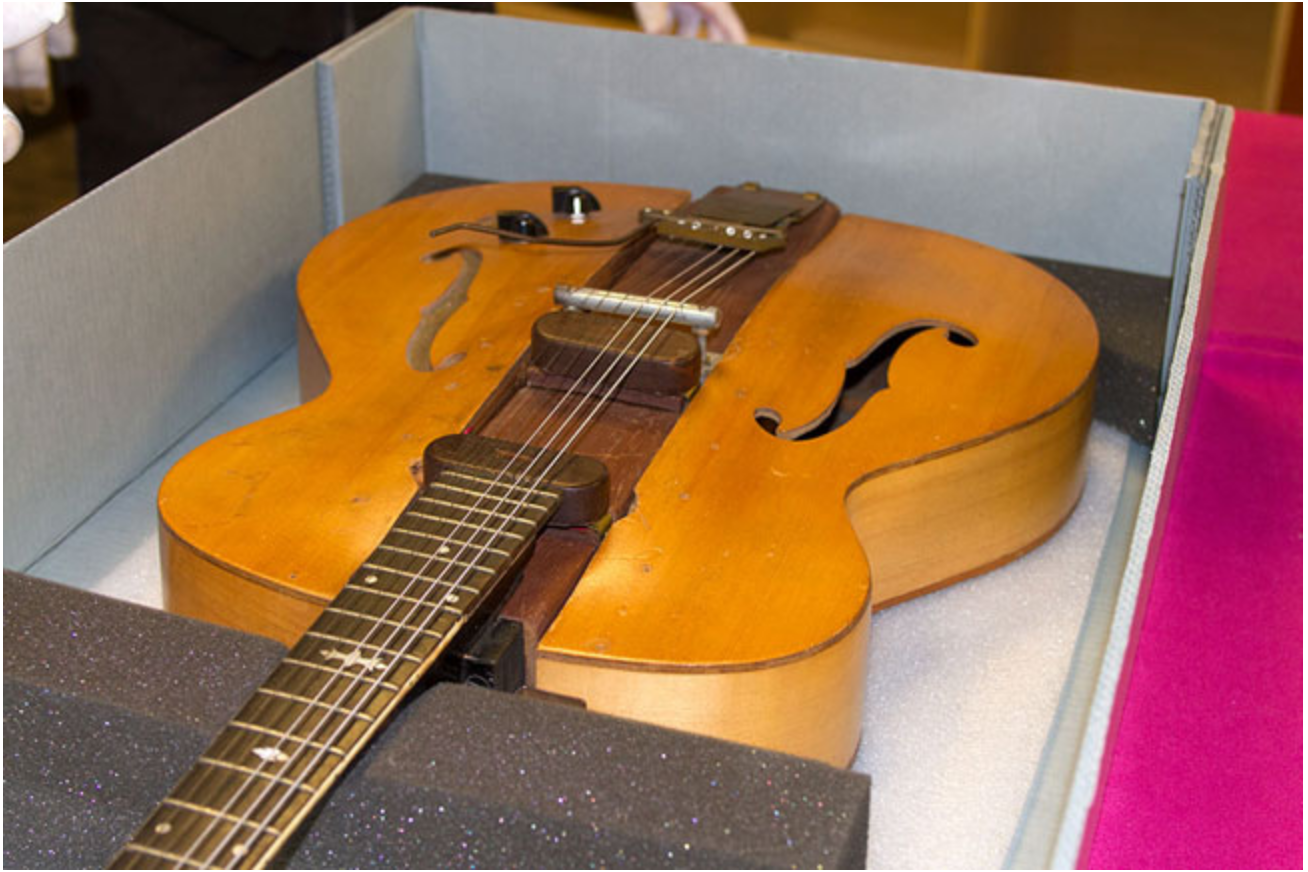 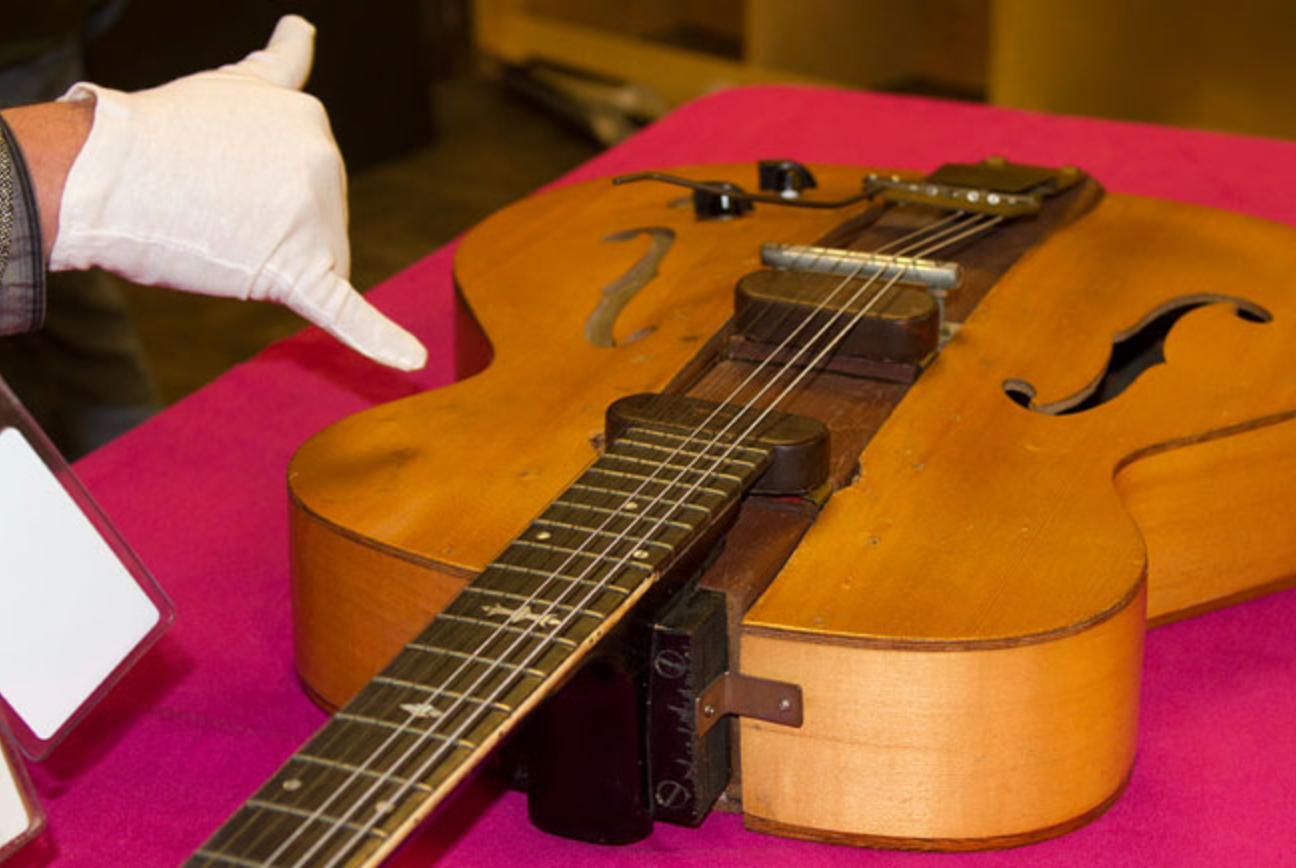 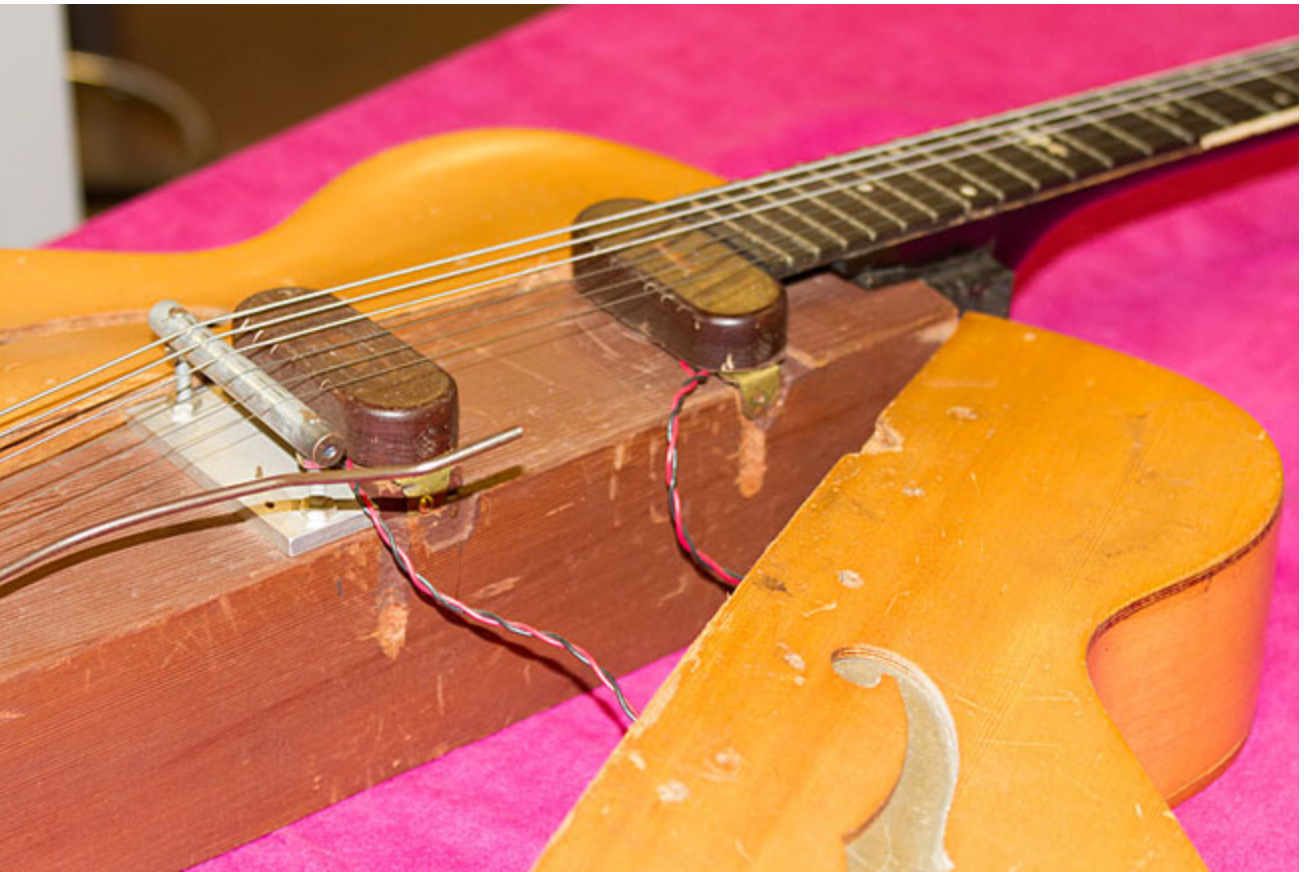 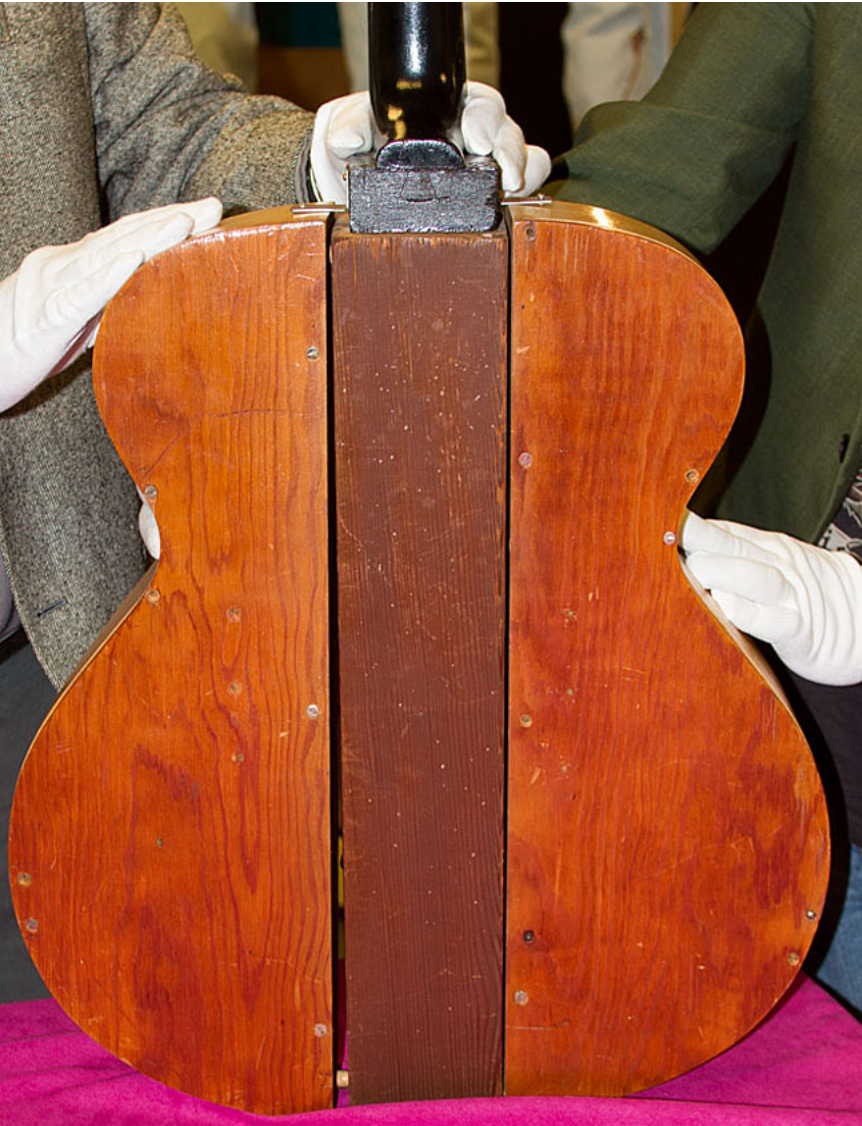 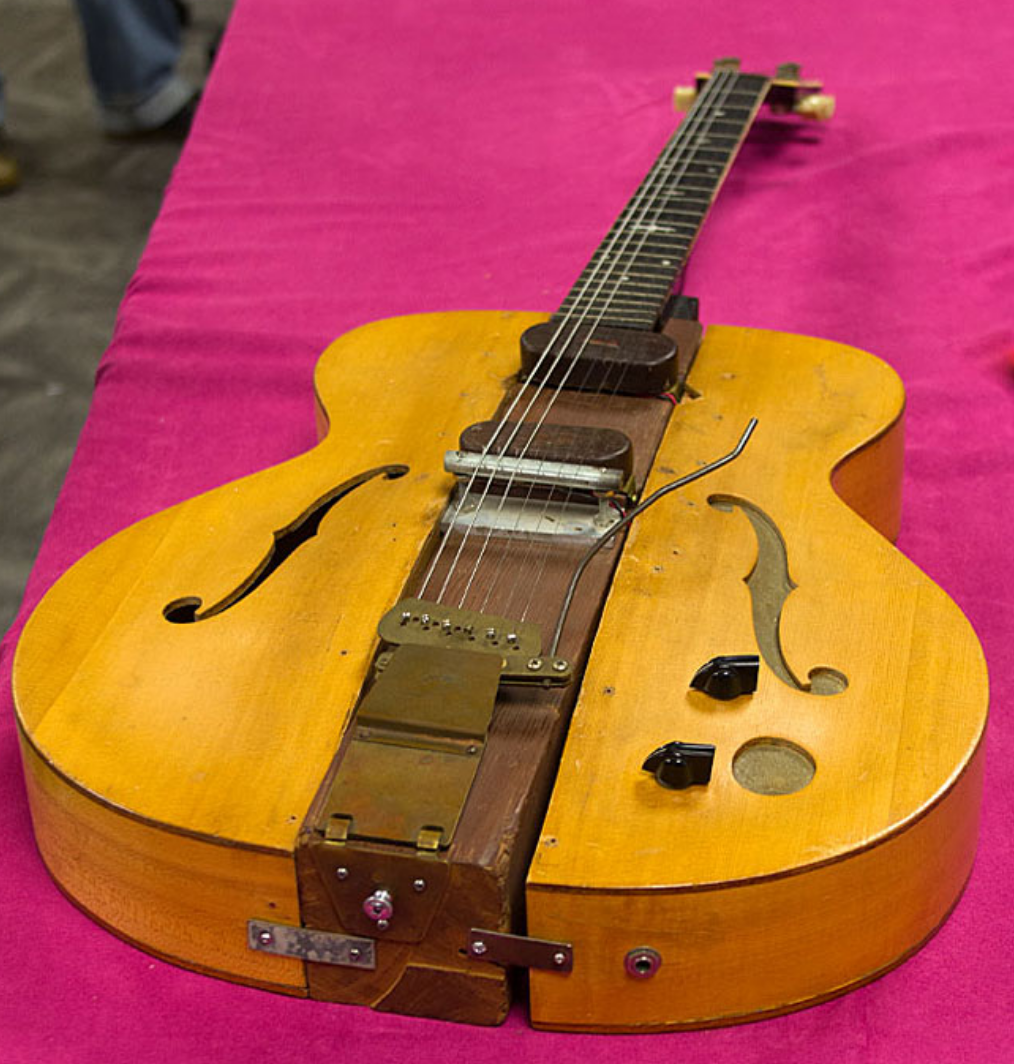 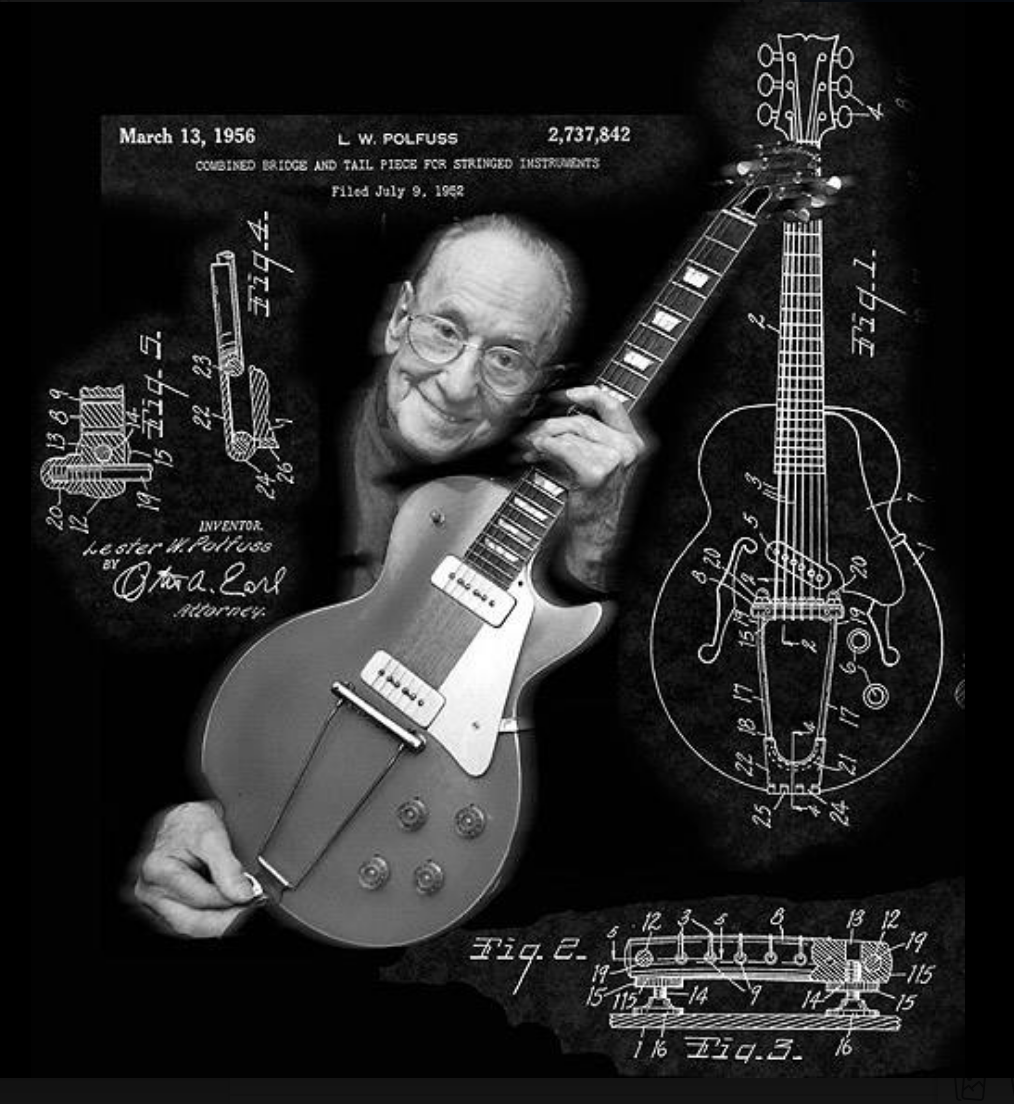 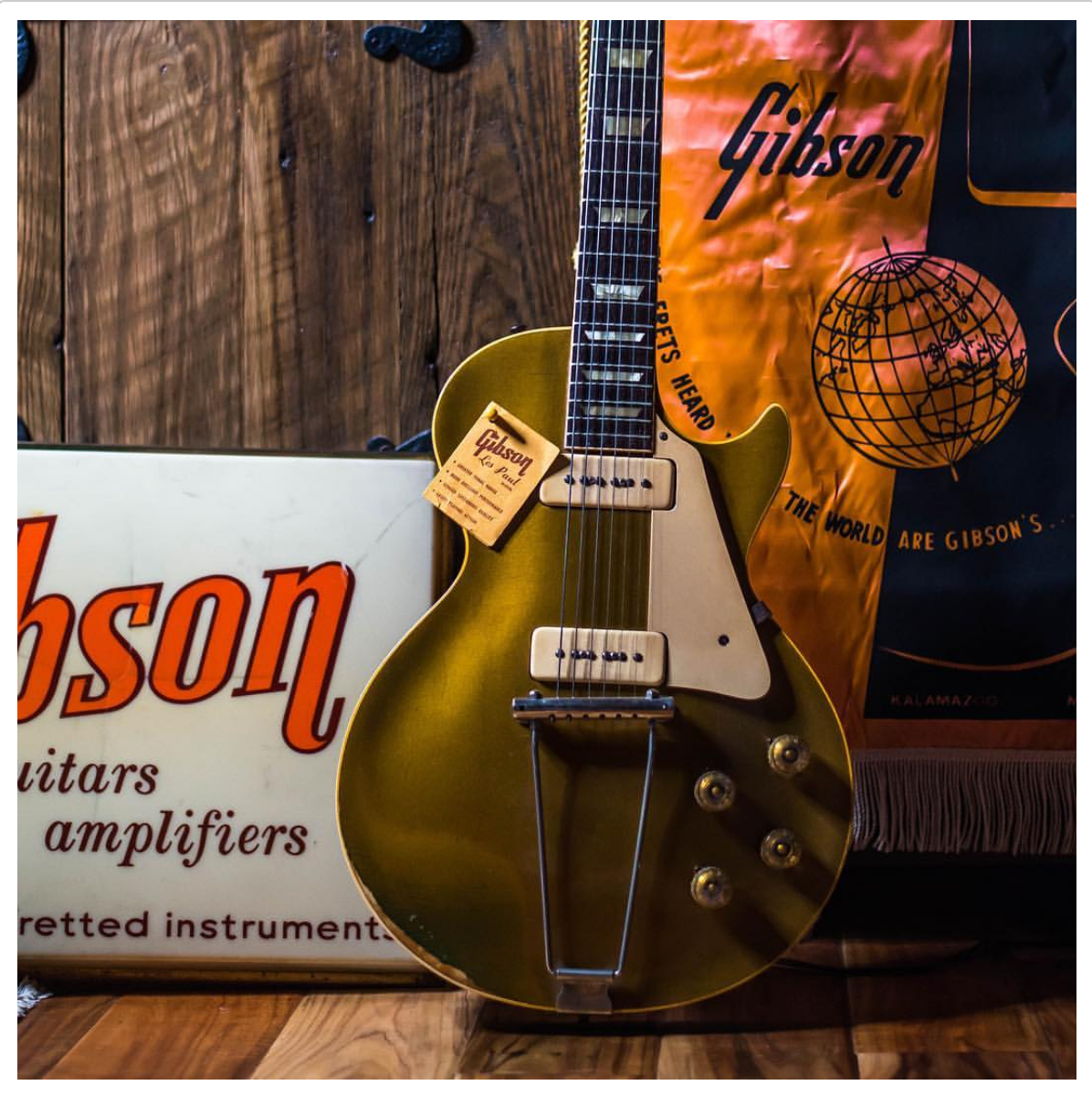 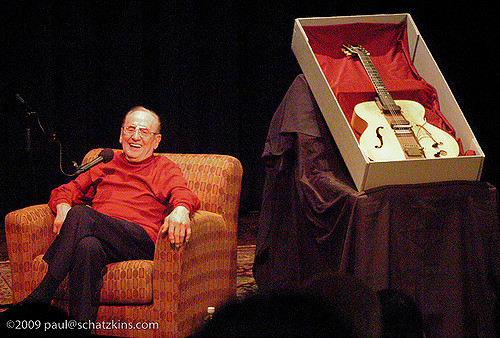 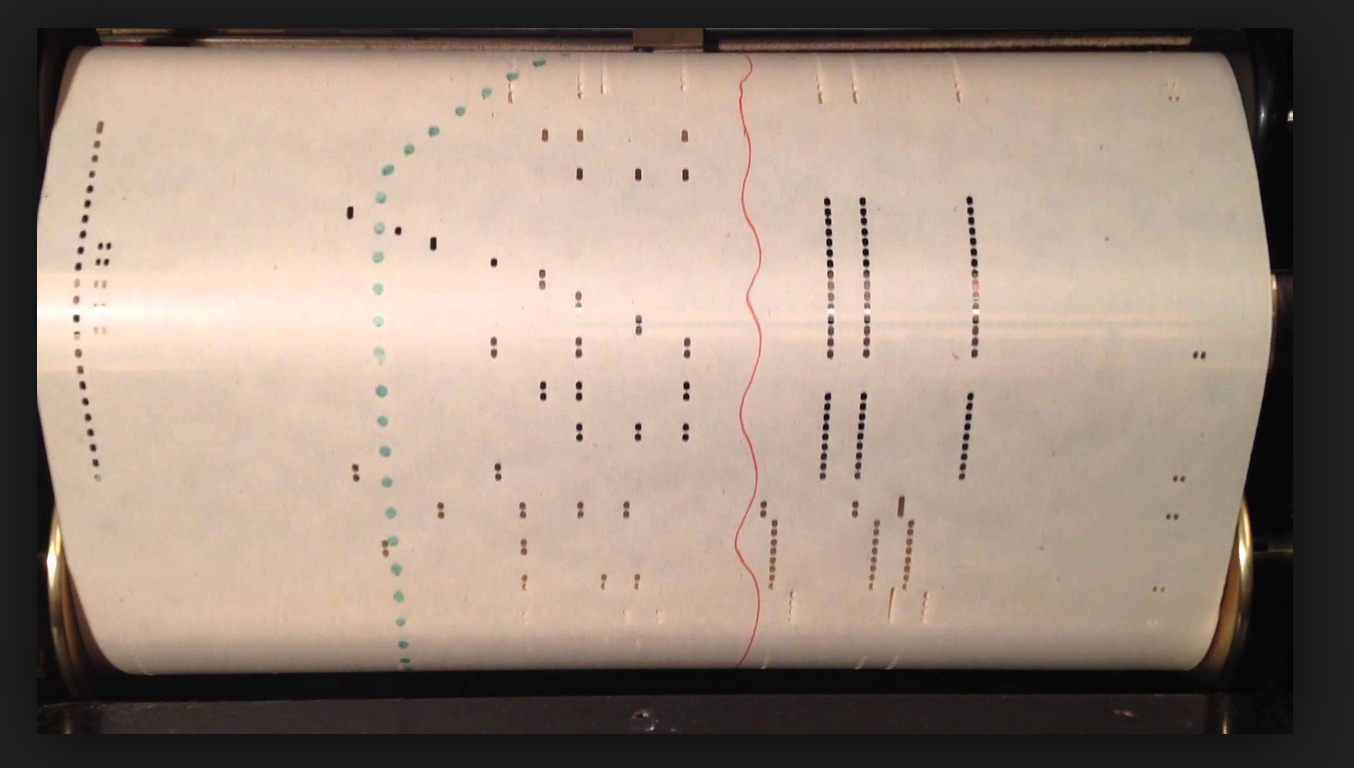 Click On The Piano Roll For A Larger View

Player Piano Roll - He would punch holes in the roll to add notes, or tape them over to remove notes.

A copy of the disc-cutting recording lathe dad built.

The Holy Grail Of Guitars!

From Les And His Era

To The Guitar Wizards Of Today

Read About Who Is Using The Instrument

That Blends The Generations Together

And Keeps The Legend Alive